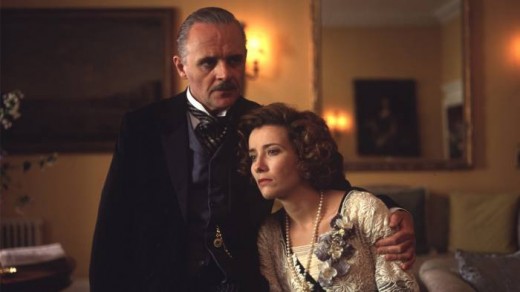 Emma Thompson won an Academy Award for Best Actress for her role as Margaret Schlegel in the 1992 intricate tale of love, hope, and cruelty. Howards End was adapted from the novel by E.M. Forster (A Room with a View) and directed by James Ivory (Call Me by Your Name & Maurice). Helen Schlegel (Helena Bonham Carter) falls for Paul Wilcox (Joseph A Bennett), but is rebuffed. Her sister Margaret (Emma Thompson) becomes friends with his mother (Vanessa Redgrave), who promises her the family house, Howards End. Unfortunately, after her death, the will disappears and it appears the inheritance will disappear. Until the widower, Henry Wilcox (Anthony Hopkins), becomes attracted to Margaret. Director: James Ivory Cast: Emma Thompson, Anthony Hopkins, Vanessa Redgrave, Helena Bonham Carter, Joseph A Bennett and Samuel West.